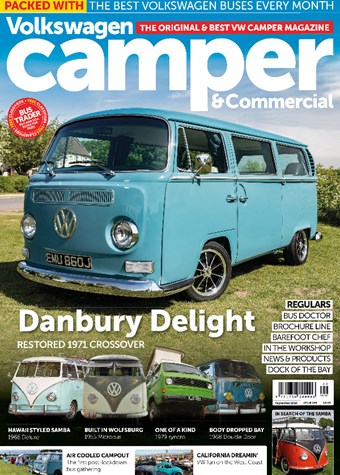 This month’s we have an extra bus feature making seven feature buses to inspire you.
A special feature on the history of the Danbury Camper is complemented by a lovingly
restored, immaculate 71 Danbury that blends stock and original features subtle custom
touches and modifications. This is a route taken by several other feature buses this
month: a Wolfsburg built March 1955 Microbus in original paint with custom stance from
a narrowed beam and adjustable rear springs; a slammed 1968 Double Door Panel Van
featuring original paint, patina and signwriting; a 1966 Deluxe Microbus that takes its
styling theme from Hawaii and the Honu (Sea Turtle) and an air cooled syncro! (No,
that’s not a typing error, it’s an early T3 that has been converted into a syncro model.)
Plus a 72 Dormobile rescued from a barn where it had stood for 2 years , restored and
given an interior makeover whilst retaining many stock features and a T4 which
remains, unusually, at stock height and apart from some black detailing is also in its
original paint. And another special feature showcasing more Sambas than you can
shake a stick at!