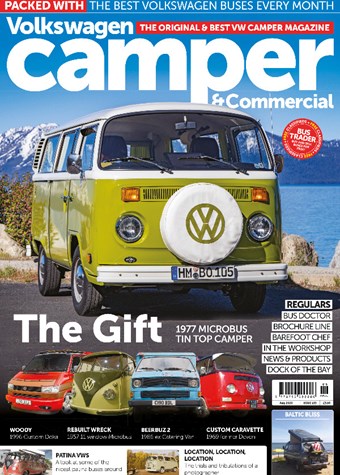 Creating your own look and style is part of the joy of owning a bus; our 1957 former
Microbus shows just what can be done with even what appears a total wreck; hard to
believe when looking at it now with its blend of original and subtle custom styling. The
metal flake paintwork is probably the most eye catching feature of the 1969 former
Devon, especially the way it sparkles in the sun, whilst a workhorse T4 Doka has been
given a totally new Hot Rod Woody look. And then the gift that keeps on giving;
originally a 1977 Microbus, this Bay has only had three owners and each of the previous
owners passed it on as a gift. Finally two rare and unusual Box Van conversions - a
1966 Kemperink Delivery Van, now a camper and a 1986 former German Army field
catering van, now a mobile pub!
Also in this issue we take you through what the VW Patina scene is all about with some
of the best Patina buses around, we take a trip down Diesel Street and unearth some
vintage gems in the Stiftung Auto Museum and we learn about the trials and tribulations
of finding the right location for a photoshoot. We join a T3 in Russia and have a close
encounter with the military police and, to get you thinking ahead to better times, we
check out some lesser well known and less frequented spots to visit with your bus. Plus
How To guides on replacing window glass and fitting a retro dash speaker into your
Bay.