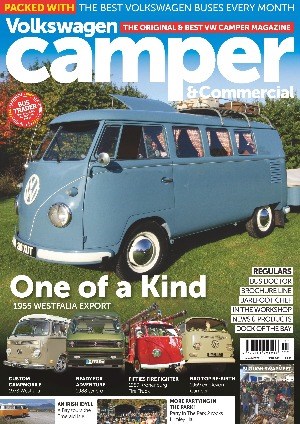 March 8th 2020 sees another milestone for the VW story, as it will mark seventy years since the official start of production of the new VW T1 Transporter.

To mark the 70th Anniversary here at mag HQ we have unearthed two very rare and original T1 examples that are an important part of VW history – and of course one is a Camper, and one a Commercial - a 1955 Westfalia Export and a fully equipped and operational 1959 Dutch fire truck. The Export was Westfalia’s first fully fitted out camper, only produced in 1955 > 6. Only eight are known to survive; this example is only one of two that retains all the original fittings but the only one still driveable, plus it’s the eleventh oldest Westfalia Camper known (and that includes some non-runners and shells!). So think mega mega rare!  The fire truck was originally a conversion by Dutch firm Kronenburg; now fully restored with working pump motor and hoses it still gives demonstrations of its fire-fighting capabilities today.

Our other feature buses exemplify how owners put their own stamps on their VW buses. A Mouse Grey 1973 Campmobile combines and blends stock and subtle custom styling touches to make one very distinctive looking camper whilst a 69 former Devon has been meticulously restored from the ground up by its owner to use as a wedding hire bus. Then we have a pop roof rugged looking syncro camper finished in metallic green; unbelievably just 12 months ago it was a fixed high roof white beastie! Our last feature is not for the faint-hearted – the Chrome Yellow Custom Flatbed from Transporter HQ featuring twin exhaust stacks behind the cab and an air ride stance so low you need a feeler gauge to measure ground clearance!