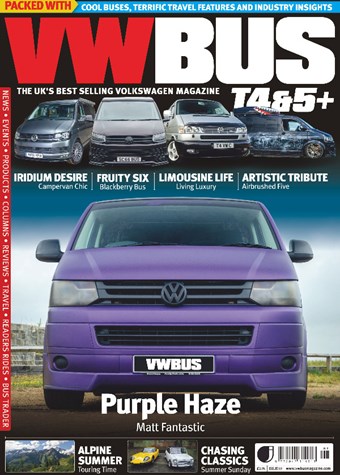 This month we have once again chosen more travel and lifestyle pieces to
vicariously live the life we want. In the last issue Richard and Jackie Pickles finished
their NC500 trip, this month we turned them straight round and sent them out in their
T6 to enjoy an Alpine Summer on our behalf. Ian Pegram and Juliet Sheppard have
reached Mongolia in the fourth instalment of their epic trek in a T6. David and
Annemarie Storey started their six-month sabbatical last year by taking their T5 to
Holland before heading to Scandinavia. Anne Rogers relates the tale of a few sunny
Sundays in her T5 at Bicester Heritage for the Sunday Scrambles. Finally, Nick
Winnall from Rugs For Bugs talks us through a weekend of trading at a show.
On the bus front: DC Campers show us round their latest creation, Robin Holmes’
matt purple camper turns heads wherever it goes, Richard Hales takes us on a tour
of his high spec and huge Crafter conversion, Mark Cherrington of Starlight Campers
shows us his own personal T6, Mark Horrell’s airbrushed T5, called Warhorse, is
definitely one of a kind and Leighton Cooke’s Limousine T4 whilst not unique is very
rare.