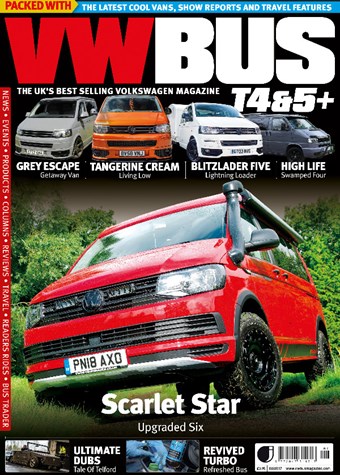 May Madness
Text: This month, we have another six super bus features. In order of appearance
there’s Danny Ogden’s sublime grey T5, another of the ever-growing number of
conversions featuring an L-shaped layout. Next is Martyn Hillman’s ‘Small But
Mighty’ Caddy Camper, a van where long wheelbase is a relative term. Then there’s
Danny Graham’s slammed T5, a well-known bus that we’ve wanted to feature for a
while now. This is followed by Emma Cole’s Swamper T4, a bus with a very different
attitude to altitude, but no less cool for all that. Our fifth bus is something very
different, Wabtec’s Blitzlader has a chassis that hinges behind the cab… Our final
bus is Matt Brookes’ T6 Swamper, a bus that could easily be described as ‘a cut
above’. Elsewhere in the magazine we visited Ultimate Dubs our last show before
lockdown and report on the Great British Campout for the NHS, the first of many
virtual shows, this one included a driveway campout. We have a company profile on
Devon Duvets, a trip to meet Cookie of Cookie Cartoonery and a tech feature on
Revive turbo cleaner. Ina Pegram has reached Russia en route to Mongolia and new
contributors Richard and Jackie Pickles start the NC500. There’s more, of course
there is, but you’ll need to grab a copy to find out what. Love your bus, sleep in your
bus, but right now just don’t drive your bus.