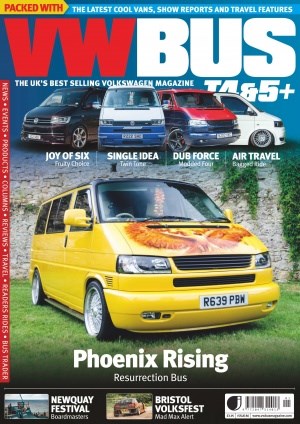 A Transporter Isn’t Just For Christmas

Christmas issue time and Harriet and Dan are back to tell us about the next stage of their monumental Australian adventure, the Nissan has gone to be replaced with a T5 ready for conversion. Not very Christmassy I know, but there are fireworks and sunshine a plenty to make up for it.  Hélène returns for the last time to share her thoughts on long-term van living and solo traveling, no mention of presents or tinsel here either I’m afraid. Festive feature-wise we have Phillip Webb’s stunning T6 camper in one of my favourite colours, Blackberry. South Coast Transporter’s very own Diana Brown shows us round her hot yellow T4, a van brought back from the dead. Tony Everson has a familiar story, he bought a van for a specific purpose and got carried away. On the plus side he now has one of the coolest T5s around. Unusually we have two two-tone buses in this issue, both T4s. The first belongs to David Bostock, retirement for him meant building a very special T4. The second belongs to Ian Butterworth, his T4 is a heavily modded machine, it’s one of those ‘the more you look the more you see’ jobs, and all the cooler for it. The final feature bus in our line-up is certainly not the quietest. Platinum Campers ICE laden demo bus is a sight for sore ears, if you see what I mean?.. I realise that none of those features are exactly rammed with yuletide cheer, but I can promise you that there are no turkeys amongst them.

Elsewhere in the magazine we turn the clock back to earlier in the year when Andrew Thompson visited two very different events. On the first he ventured just down the road from his Bristol base to drop in on the Bristol Volksfest, on the second he went further afield to Boardmasters in Newquay. Again, not that festive, but things took a turn towards the North Pole when Alan sat down with Santa Claus for a one-to-one Q&A on his VW fleet, no really he has a fleet of the little devils! Then when Autoholics took to his kitchen to bake up some Squareback Stollen, things were back on a more festive track.

Treat yourself (or someone else) this Christmas and buy a copy, or a subscription come to that.

A very Happy Christmas from all of us here at VW Bus T4 and T5+.