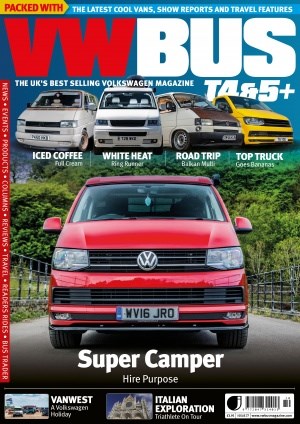 September is here and issue 77 is upon us. A varied collection of five Transporters and one Crafter grace the pages this month. Andy Stretton of Transporter HQ has his T5 bagged shop truck featured. Now before anybody says anything I know it looks like a T6, but underneath it’s a T5, trust me. It won the people's choice award at Camper Jam and it’s no surprise. Assuming you buy the magazine (and why wouldn’t you?) when you turn to the feature you’ll see what I mean, long, low, yellow and lovely. Another slammed bus, this one on hydros rather than air is Romanian Rus Horatiu’s T4. It’s a cool bus if you like your ex-Multivans ratty and we do. The fact that Rus drove all the way from Romania to Bristol to have the hydros fitted adds another dimension to the story! It is dedication to the cause and then some. Something a little taller is Steve McClenaghan’s Crafter, this is a self-build that the owner loved doing so much that he started a now thriving, company off the back of it. He’s now trading as Roaming Homes in Inverness. Connor Walker’s coffee coloured T4 was initially built by another, but since he took ownership it has been developed and now carries the owner’s stamp. AJC run byAndy and Jane Coop are a conversion and hire company, we take a look at one of their fleet, a red T6 finished to a very high standard. Our final feature bus is Trigg, owned by Ben de la Salle and Rachael Cameron. Trigg is something of a celebrity in the Run The Ring community, having been a convoy lead out bus on the first Run, somehow he managed to avoid being in any of the thousands of pictures taken that day, even the ones taken by our own ace snapper, Andrew Thompson. Well this month Andrew re-dresses the balance with a whole feature on the erstwhile invisible Trigg. Elsewhere in the magazine, Hélène, our resident triathlete, is charging through Italy, she’s loving the cultural side, but hating the roads. The Amalfi coast gets a particular roasting. Steve heads to Epernay in France, the epicentre of the champagne world. Andrew reports from Vanwest held at Brean earlier in the year and Simon went to VAG At The Manor for our first visit. Anne visited OXcampers for a look round and met Pete Townsend from The Who while she was there! Newcomer Matt Bridge-Wilkinson, puts Slidepods’ new Nest Box through its paces, look out for more from Matt in the coming issue. Finally, there is a chance to win one of the excellent new Chairpods. I’d love to tell you more, but you know what? You really should get a copy. Its available at all good newsagents from 12th September, of course, subscribers get it nearly a week earlier. Alan