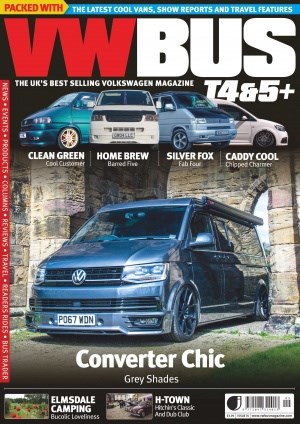 Issue 76 goes out to subscribers on 2nd August, it will be on the shelves of all good newsagents, and a few rubbish ones, on 8th August.

By that time, like many others I will be on holiday. So, if you’re going to take VW Bus with you to read: on the plane, at the beach, by the pool, in the campsite, up a mountain* etc (*delete as applicable), then this is what you’ll be filling those sun-kissed, idle hours with…Pete Staniforth of Camper Converters shares his grey T6 camper, a demo built to show what the company can do. Andy Stretton of Transporter HQ shows us round what used to be his own personal bus, a red T6 camper with twin sliders. It was his bus right up until a customer took a shine to it and made him an offer too good to turn down. Paul Davis gives us the tour of his white T5, this one is a self-build with a U- shaped lounge and a bar out back. The T4s are represented this month by Bill Shipley and Andy Abbot. Bill’s silver T4 is another with an unusual layout, an LWB bus with a full width bed, a kitchen ranged across the van’s width directly behind the front seats and a side opening pop-top. Andy’s bus does not have an unusual layout, but that doesn’t mean it’s not an unusual bus. It’s a Dragon green Caravelle Syncro, that he’s lovingly restored to its former glory. Now the mathematicians amongst you will have noticed that the buses so far listed, number just five. The sixth and final bus is a small one. We haven’t had a Caddy for a while, we’ve been waiting for a belter and Shane Broda’s van fills that requirement to a tee. White, riding on air, clean and deceptively simple, it is a thing of great beauty and we love it! What else will be filling your summer time browsing of the bus world? Well, I went to Elmsdale Camping in Herefordshire to review a campsite, before returning home to road test a new petrol powered T6. Adam went to Hitchin to meet their Dub Club, before heading off to Suffolk for the Dublogic show. Dave went to Essex to report on TOMIE. Steve popped in to see Ant Edensor aka Mr Whitewalls before returning home to bake some Jimmer Jammers (no really, he did). Simon visited CustomCamper Solutions in Market Harborough for a shop tour. David dropped in on the Husbands Bosworth Festival and Hélène, who always seems to have the best gig, journeyed through Croatia and Bosnia in search of great camp spots, beautiful bike rides and memorable places to swim. Now we’ve reached the part of the text where I say that “there are loads more but you'll have to buy a copy to find out exactly what”. Enjoy your holiday, and if you’re not having one this year, sorry. I hope you enjoy the issue either way. Alan