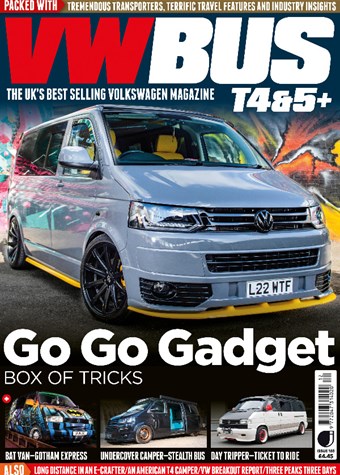 We have another cracking and varied issue for you this month. Buswise, in order of
appearance you’ll find Karl Pearson’s one of a kind T4 Bat Van, the artwork is
courtesy of renowned artist, Luke Brabants. Our second bus is the polar opposite,
Berni Bernstein’s black T5 was built with stealth in mind. Next up, Tim Bletcher’s
Tornado Red T4 is a clean simple camper conversion and all the better for it. Our
fourth bus is Greg and Laura Lee’s beautiful grey T5, just wait till you catch a glimpse
of the interior. Our penultimate Transporter is Mark Doe’s self-built stunner, this ticks
all the DIY boxes, sprayed on the drive, some quirky touches and an unusual interior.
Our last bus is by no means the least; a T6.1 Kombi built by Van Haven to their TTR
spec with some added extras, it is a real tour-de-force much as we have come to
expect. It is also the first T6.1 that we have featured in the magazine.
Travelwise, Ian and Juliet are fording a massive Mongolian river in their T6, David
and Annemarie are heading into the Alps in their T5 and Jim is using a borrowed T6
to shuttle between three of the highest peaks in the UK, so that he and his brother
can climb them all in just three days! Then there’s the Dane Frank Eusterholz, he
drove an e-Crafter, a van designed for urban use and short delivery runs, from
Hannover all the way to the North Cape in Norway via his home on the Danish island
of Samsø. There is a whole load more, but you’ll have to grab a copy rather than
reading this, then turn some pages and enjoy!