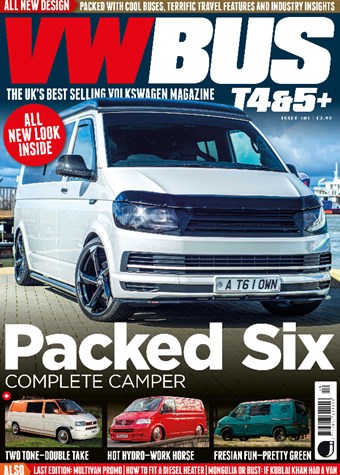 The ‘New Normal’ – A phrase that is much used these days, in fact both Oli and David use it in their columns this month. It expresses, as you know the fact that the world has changed and not necessarily for the better, but we’ll just have to get used to the new way it works. Well I intend to claim the phrase back in a different, more positive way. This month VW Bus has undergone something of a change. Over the last few months we have introduced some new columns and ideas, these seem to have been well received, take Oli Grogan’s ‘Luxury Is Less’ column as a good example. This month, however, we’d like to introduce you to a new fresher look for the magazine. We have retained all the popular features and columns; the baby has most definitely not been thrown out with the bath water! Think of it as a facelift, much in the way that VW constantly evolve the iconic Transporter, welcome to VWBus T4&5+.1.
So, six cool features this month: first up is Paul Hooley’s very sharp two-tone T4, next is Sam Huggins’ stunning T5 work van, yes, that really is his daily work van! Our third bus is Matt Bremner’s cool white T6 camper and this is followed by Daniel Molyneux’s lovely Friesian green T4 family camper, then there’s Nancy Noodle, Martin Lineham’s unusual T5 with a heart-warming story. Finally, bus-wise, is Keith Jones’ amazing T6 camper, as subtle as it is clever, this custom self-build is a bus to be much admired. Travel pieces have always been a mainstay of the magazine and this continues with Ian and Juliet traversing Mongolia in their T6, David and Annmarie are in the Baltics in their T5 and Jim is in Belgium, in the ‘Stolen Goat’ T6 Kombi. Elsewhere you’ll find a look at how VW ‘Promote The Product’, a ‘How To’, an ‘Insight’ and a ‘Shop Tour’, along with all the normal news, new products, reader’s rides and our three regular columnists. This is the ‘New Normal’, we hope you like it.