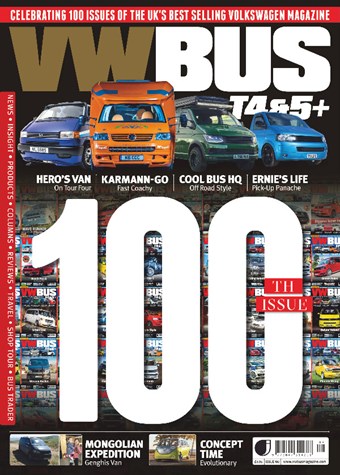 Happy Birthday To Us

Well, we’ve reached the grand old age of 100. I can’t say any of us involved in
that first trial issue were really thinking that far ahead. Yet here we are nearly nine
years on with 100 issues in the archive. We have saved some of the best buses
around for this auspicious issue. In order of appearance, there’s a rare studio shoot
for comedian Jess Thom’s tour T4, Grant Gwyn reveals his stunning orange Caddy,
we don’t feature that many Caddys but this one is a beauty and worthy of a place in
this special issue. Next is Ernie, well Toby Stowe’s T5 single cab pick-up called
Ernie, an unusual build with a spectacular end product. Then there’s what might be
the most famous bus we’ve ever featured, James Sharp’s Orange Karmann
Colorado, star of You Tube and self-styled ‘Fastest Motorhome In The World’.
Following that, if such a thing is possible is Darren Liquorish’s T5, on air-ride with a
Thunderbird’s door and a great story. Finally, we have Transporter HQs Trayback,
one of the most talked about and photographed Transporters in the country. Drawing
a crowd wherever it goes, we beat them off with a stick and took it into the wilds,
where it belongs. How in the name of Transportery goodness we managed to fit all
this into one magazine I’ll never know, but here it is. Not only that, we have Ian and
Julia heading into deepest Mongolia in their T6, Richard and Jackie are completing
their Alpine Summer, whilst David and Annemarie are currently in Norway. David is
looking back at the concepts VW have been producing since the turn of the century,
Richard is looking back at how VW promoted the first T5 and Simon visited Starlight
Conversions for a shop tour. There is much, much more inside so grab a copy and
get turning those pages. But before you do, here at VW Bus we’d like to thank you,
the readers, for supporting us and helping us to reach the magic 100. It doesn’t stop
here though, make sure you’re here for issue 101, as we’ll be bringing you something
new and fresh…