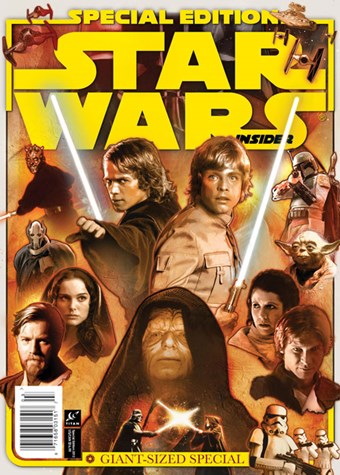 A 148-page Special Edition of Star Wars Insider is on sale NOW at all newsstands for a limited time only!

In this collector's issue, we celebrate the master behind the Star Wars saga, George Lucas, through highlights from the movies, both on and off camera and exclusive interviews with special effects supervisor John Dykstra, R2-D2 - Kenny Baker, and co-producer Robert Watts!

There are other fantastic interviews included in this special edition from James Earl Jones, Carrie Fisher and even respected Animation Director Rob Coleman!

This Star Wars Insider Special Edition also celebrates a rare peek behind the scenes of the Jedi Council from the Lucasfilm Archives. Here we see exclusive photographs of the creator of Star Wars, George Lucas on the sets of the movies.

Plus, the issue features the all-new story 'Vader Adrift' starring Darth Vader by Ryder Windham, with art by Joe Corroney.