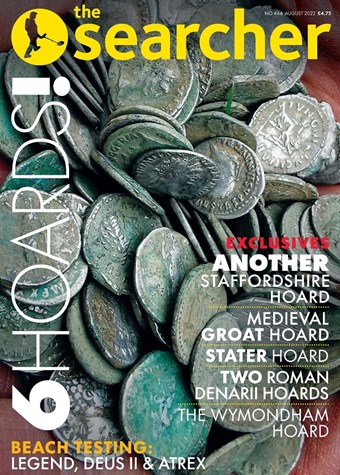 Our EXCLUSIVE cover story this month is a Roman silver denarii hoard discovered in Staffordshire. Finder Lee Davis recounts its discovery and Adam Staples looks at its historical background and composition. Other exclusives are a hoard of groats found on a Metal Detectives group dig, a silver stater hoard found by John Hinchcliffe after 22 years of metal detecting and two other Roman denarii hoards. Daniel Spencer tests out the XP Deus II, Nokta|Makro Legend and the Rutus Atrex at the beach and shares his preferred settings for both wet and dry sand. Andrew Thompson shares the repatriation of a pilot’s badge he recovered from the middle of a field which revealed an amazing story of how it came to be there. Of course, there’s much more within the covers of this edition.