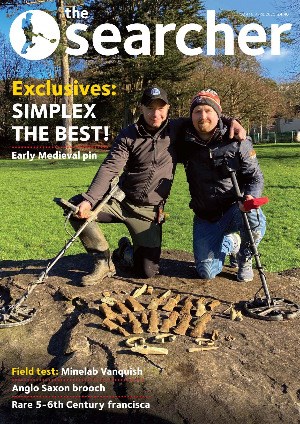 What’s new in this issue?

Our cover EXCLUSIVE is TWO large Bronze Age hoards discovered in Wales with a Simplex+ by Craig Hearne and Kieron Sloan.

Another EXCLUSIVE is an early 7th century large bronze pin like artefact which is currently with the Ulster Museum. Adrian McStraw, who is getting to be a regular in this magazine having had two items of treasure featured last year, is the lucky finder using his trusted Deus. Other exclusives include an Angle Saxon brooch and a 5th-6th century francisca found 18” deep with a RUTUS Alter 71! Daniel Spencer test ‘drives’ the new Minelab Vanquish and the new XP backpack and finds pouch. Of course, there’s much more besides in between the cover of your April issue.