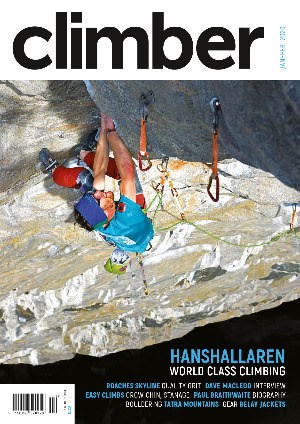 Recently I attended my ﬁ rst Kendal Mountain Festival in three years, having been tied up over the last couple of years with work, and dare I say it, a climbing trip. Keith Sharples has usually stood in for me
but this time he wanted to go climbing in the USA, so it was my turn to make the journey north and step in for Keith. As always it was
a pleasure to bump into many friends that I only see once in a blue moon to shoot the breeze.
One of these was Tim Emmett, always smiling and always psyched, and now he lives in Canada it’s rare that our paths cross. I had a great chat with him about what’s he’s been up to, his family and staying alive. This refers to his (and team) decision to abandon an attempt on Everest due to potentially lethal seracs hanging over the route. A wise choice judging by the photos he showed me, the mountain will be there another time and the trick, as experienced mountaineers will tell you, is to make sure you are. Anyway, perhaps I won’t leave it so long to attend KMF in future as I had a lovely time, even managing to see a few things amongst the chatting.
Someone else I’d not caught up with for ages was Dave MacLeod who is the subject of Chris Prescott’s ﬁ lm, Undiscovered. A feel-good ﬁ lm exploring the potential of new routes waiting to be climbed in Scotland. I’ve even climbed a modest new route up in Sheigra’s Second Geo in the far north back in 2000, a lovely little VS on this superb sea cliff (although it’s been credited in the guidebook to someone else who did it a couple of years later). There is so much potential for anyone at any grade to go there and come away with a ﬁ rst ascent, it just takes effort. We have an interview with Dave in this issue if you want to ﬁ nd out what makes him tick