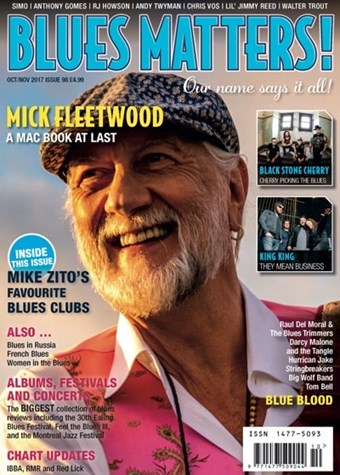 In this edition, we have an interview with the one and only Mick Fleetwood! Our writer Pete sits down with him and they reminisce about the early days of Fleetwood Mac, the band, the venues they’ve played and Mick’s recently published new book – A Love That Burns.

Walter Trout is also interviewed in this edition, he tells us about his newfound lust for life and his latest record, We’re All In This Together. This album features collaborations with the some of the finest blues people on the scene today. Artists such as Kenny Wayne Shepherd, Warren Haynes, Edgar Winter, John Mayall and more have all contributed to this outstanding blues album.

Regular pages include our Blue Blood section about up and coming/new artists, Red Lick Top 20, RMR Blues Top 50, and the IBBA Blues Top 50.  Album reviews, with over 80 different releases to browse through. And, our popular Showtime feature with festival and gig reviews from artists such as Max Marshall and Georgia van Etten. Festival news comes from Cahors Blues Festival, Ealing Blues Festival and the Montreal Jazz Festival.