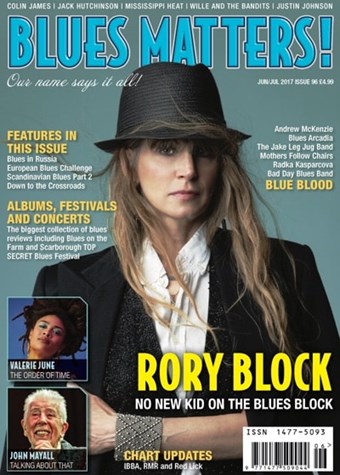 Rory Block is our main cover girl in this edition and she talks about her long and well-established career in the music business. Rory also talks about her latest album Keepin’ Outta Trouble – to hear the tracks please click here – Rory Block feature

Godfather of UK blues Mr John Mayall also talks to us about his latest release, which you can buy and listen to below.

US Blues, Soul, Singer-songwriter Valerie June also has a new album out and is enjoying touring it, she also tells us that she has some pretty remarkable celebrity fans that include Michelle Obama!

Regular pages include our Blue Blood section about up and coming/new artists, Red Lick Top 20, RMR Blues Top 50, and the IBBA Blues Top 50.  Album reviews with over 90 different releases to browse through. And our popular Showtime feature with festival and gig reviews from artists such as Bad Day Blues Band, Sari Schorr & The Engine Room, Nine Below Zero, Orange Circus Band and Martin Taylor.