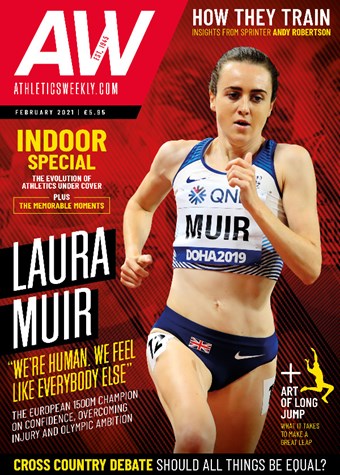 10 News in Brief – the biggest stories from the past month

28 Laura Muir on wellbeing, discovering why she still loves her day job and how she got her mojo back after injury problems

34 Examining the evolution of athletics competition under cover

44 Ashia Hansen recalls the day she hopped, stepped and jumped to a world record

48 A rundown of the best indoor performances of all time

58 30 years on from his death, Jason Henderson profiles a man who left a great legacy

JUMPING INTO THE FUTURE

ME AND MY CLUB

70 Why Charlotte Arter has so much to thank Cardiff for

76 The latest news and research

78 The Art Of – Long Jump. John Shepherd launches a new series by outlining what it takes to make a big leap

95 Test your knowledge with our quiz

96 Have Your Say: readers’ letters and opinion 97 What to look out for this month