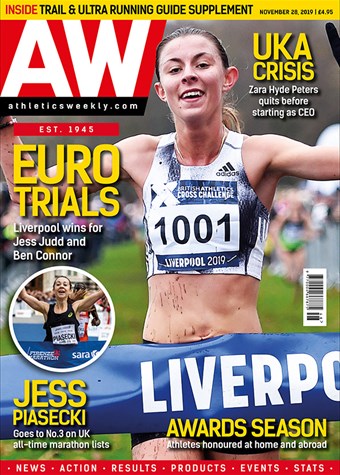 THE BIG INTERVIEW
28 JAKE WIGHTMAN
After finishing fifth in the World Championships in Doha, the 1500m runner wants to make his mark at the Tokyo Olympics next year, as he tells Euan Crumley

SPOTLIGHT
32 JEAN PICKERING SCHOLARSHIPS
In the last of our six-part series, we profile one of the Jean Pickering scholars, heptathlete talent Niamh Emerson
36 STAN GREENBERG
Former BBC athletics statistician and GB selector picks some of his most memorable jumps moments from a lifetime of watching the sport

REGULARS
38 BOOK REVIEWS
Bob Smith’s Newham & Essex Beagles’ memoirs of a team manager have been posthumously published and they are a terrific read
62 DIP FINISH
Elite athletes hit the parkrun circuit, while athletes are ready to out-run the ‘catcher car’ in Cambridge next May

PLUS, a 64-page trail and ultra running guide supplement